Travel medical insurance for US citizens

American travelers are the highest spenders among vacationers across the globe. It is believed that more than $100 billion is spent by the US traveling population for their holidays at overseas destinations. The growth rate is said to be about 3.3% annually by Americans to foreign countries. US passports are required to visit Mexico and Canada and more than 30% of population in the USA hold passports and this is going to increase in the coming years.

Several surveys conducted by government organizations show that the senior citizen (above 65 age group) travelers from America is going to be double in the next 25 years. Currently the above 55 age group is fastest growing segment. The other noticeable development is the Senior citizens spending time online for researching and purchasing travel packages than offline media sources. Internet is the powerful media for American travelers to plan their holiday in a far off country where they have never visited before.

Europe is one of the most popular destinations for American citizens for holiday and the travel industry has grown in every year. Some of the destinations most popular among American tourists are Italy, France, Eastern Europe, Asian countries. Despite the unstable economy and weak dollar, Americans still remain enthusiastic about Europe which indicates a strong growth in travel. The holiday packages and airfares are made much more attractive to woo American citizens traveling to foreign countries and Europe tops the list. After Europe are the Asian countries which attracts a lot of American vacationers.

Apart from the aftermath of 9/11 events (i.e year 2001) the American outbound travel market witnessed a 10% increase. Even with the declining dollar American travel market has maintained a significant stability. There could be a shift in the travel preferences and destinations chosen every year but overall there is a steady growth in the number of travelers visiting foreign countries for their holidays from America. Travel agents and tour operators claim that lot of the US travelers choose to book air tickets and hotel rooms online and utilize their credit card bonus points and gift vouchers. This trend will continue to grow in coming years with more in number of credit card users.

Origin cities of US travelers

The top origin cities of US citizens traveling to overseas destinations are:

The main 10 departure airports (and their % share of overseas departures in 2006) are:

When traveling to a foreign country from the USA you can be cautious not to fall ill or get hospitalized. Medical emergencies are never predicted and when happened accidentally there should be a proper insurance coverage for your hospitalization expense, evacuation, repatriation. It is a wise decision for travelers to buy US travel medical insurance to get appropriate coverage when traveling in a foreign country and avoid any financial loss. For more information on travel insurance plans, compare free quotes and American Visitor Insurance and make an informed choice.

Globehopper insurance offered by International Medical Group (IMG) is a travel health insurance plan specifically designed for US citizens and US permanent residents 65 years and older. The GlobeHopper Senior plan is available either as the GlobeHopper Single-Trip plan for single trips with coverage from 5 days to 365 days, or as the GlobeHopper Multi-trip plan which covers a period of 12 months with a maximum of 30 days for each overseas trip. The GlobeHopper Senior plan is very popular as it provides coverage up to $1 million for travelers less than 79 years and $100,000 for travelers more than 80 years old. The plan includes $2,500 cover for sudden unexpected recurrence of an existing medical ailment and $25,000 for emergency medical evacuation 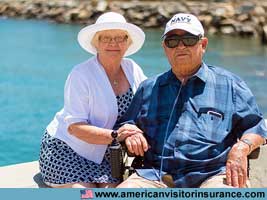 Choose visitors travel insurance for medical emergency while outside your home country.

Important factors to consider while deciding on the best travel insurance for US citizens traveling outside USA.

Helping travelers with the insurance claims process for hospitalization.