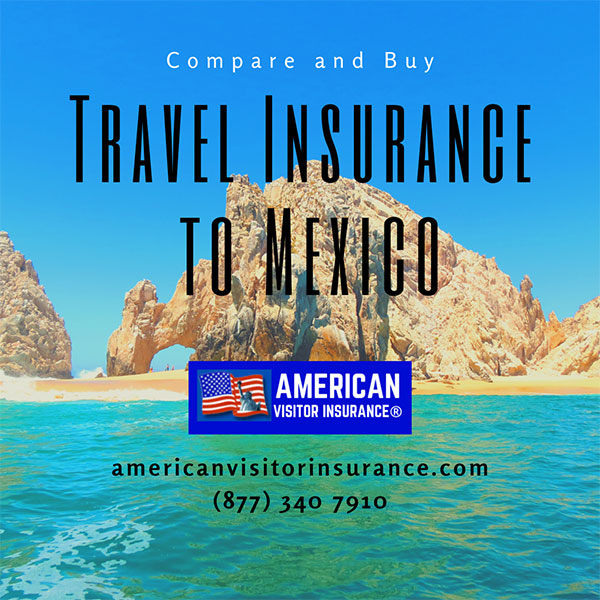 Diplomat Long Term Insurance must be bought for a minimum of 3 months and has a plan maximum options of $500,000 and $1,000,000 for medical expenses. Pre-existing ailments are however excluded, which means that travelers infected before the plan effective date, will be considered as an pre-existing medical condition and will not provide coverage for that ailment.

INF travel insurance offers travel health insurance for international travelers visiting Mexico. The Elite Network insurance and Premier Insurance offer international travel insurance with Coronavirus coverage. One of their plans (Elite) has excellent coverage of pre-existing medical conditions beyond the usual coverage for "acute onset" of pre-existing conditions which is a unique offering. The INF travel medical insurance plans are cheaper per month if you purchase for at least 90 days when you initially buy them. You can compare all available INF US visitor insurance and buy them online.

Seven corners Liaison Travel Plus coronavirus travel insurance offers coverage for overseas medical expenses arising from Covid19 infection while the travellers are outside their home country. Liaison Student Plus coronavirus insurance offers covid 19 medical coverage for international students in the US or outside their home country. It covers student medical expenses arising from Covid19 illness.Seven Corners Wander Frequent Traveler Plus offers annual medical coverage for business travelers, corporate travelers, employees, employers or anyone taking multiple trips frequently. It covers international medical expenses arising from Covid19 infection.The Covid19 treatment benefit is available for COVID-19 (the disease); SARS-Cov-2 (the virus); and Any mutation or variation of SARS-CoV-2.

Atlas travel insurance with coronavirus coverage will cover eligible medical expenses resulting from COVID-19/SARS-CoV-2. Eligible medical expenses are medically necessary expenses that are not subject to another plan exclusion.
Note that Atlas plans purchased on or after July 15, 2020 do NOT exclude COVID-19 medical charges.
As ever, we wish you safe and happy travels. Do call us with questions or concerns you may have.

Travel to Mexico, Vacation in Mexico and need for travel insurance 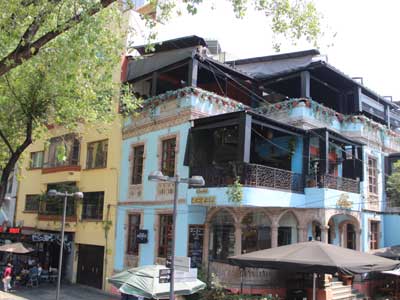 Hello Fellow Travelers!,
I just got back from a fantastic trip visiting beautiful Mexico! I went to Mexico City with my two youngest sons to show them some sites and visit family down there. As it happens, before we left, I purchased an annual plan for the whole family which will cover us, not only abroad, but also when we are 100 miles away from home. This was important to me because our current domestic insurance, while good, does not offer international travel medical insurance coverage for US citizens travelling to Mexico very well. AND, since we travel out of state quite often (several times per month), I always had this bit of a worry in the back of my mind.

This Mexico travel health insurance is called Voyager Annual Insurance and is offered by Travel Insure Services. You can also compare and review other Trip cancellation insurance for travel to Mexico. There are two levels (we picked the lower of the two) of the plan. The base plan is a set amount per year and the second level is based on the ages of the applicants. It is somewhat unique in offering coverage (if you have a primary health insurance plan) in the US as well as abroad; many annual plans only cover you when you leave the country which is why I chose it. We have a few trips coming up this summer where we will visit my parents (a day's drive away) as well as to see Yellowstone National Park, so that way we can go with a little more peace of mind. I also have a travel credit card which does not charge me for international/ non-US dollar purchases and has some travel benefits included on it as well. However, there is no health insurance, it would give me a refund on travel costs I purchased using the card (plane tickets, hotel booking). Still, I decided I really didn't need any more coverage than that. Thankfully the whole trip was uneventful and very pleasant.

It was a very nice time of year for travelers visiting Mexico. We went in mid April when they are currently in their 'dry' season, so although we went prepared with raincoats, we never unpacked them. Here are a few things we did, which I would highly recommend.

We took the "Turibus" which is a double decker tourist bus you can catch in many parts of the city which takes you on a round trip of an area with guided audio included (you can pick up a headset in several languages if needed; the voice you can hear on the bus is in Spanish). We took the "Downtown" route which circles through some of the main avenues of the city and includes stops at the Zocalo, which is the main plaza of Mexico City home to several government buildings, the Cathedral, and the excavated Templo Mayor (a temple that was uncovered when some construction was started near the Cathedral). Unfortunately, it was a Monday and all museums are closed on Monday (file that away to plan your stay), so all we could do was walk around the outside of the excavation. You can take any of the routes you want and get on and off as many times as you like.S There were routes to get to the Basilica and other places, but we kept it simple. 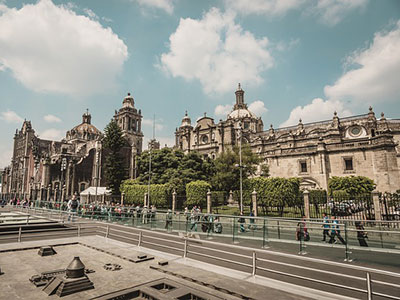 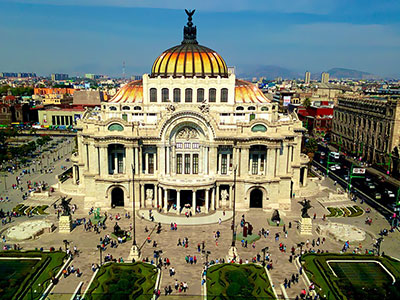 Angel of Independence on Reforma Avenue

One day, my cousin drove us out to Teotihuacan which is a pre-Aztec city with three major temples in it: the Temple of the Moon, the Temple of the Sun, and the Temple to Quetzalcoatl all linked by the Avenue of the Dead. There is a museum there as well as new excavation and discoveries all the time which makes this a great place to visit each time you are in the area. There are many tour companies that come out which may include food as well as a guided tour. I highly recommend eating at "La Gruta" which is in a cave very near the park. They have a very diverse menu and the ambiance is fabulous! 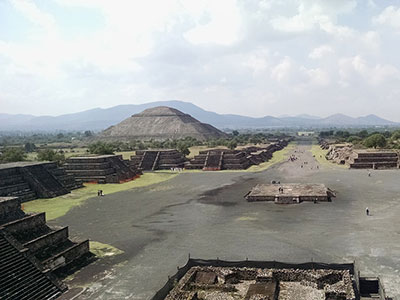 Temple of the Moon, Teotihuacan 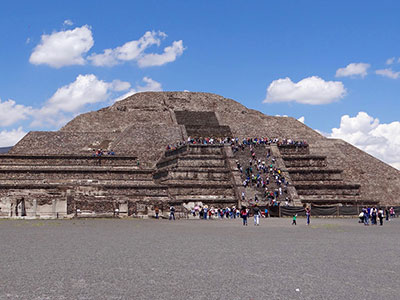 Temple of the Sun, Teotihuacan

There were quite a few people at Teotihuacan since it was a school holiday (holy week before Easter), but, if anything, the lines to go up the temple just made it that much easier to climb up. Not that I needed a break or anything (*cough*).

Before I left, besides checking into US travel health insurance for Mexico and what my travel credit card would do for me, I downloaded the Uber app on my phone and entered the credit card I wanted to use for that as well as the Airbnb app. I had already used Airbnb while in Europe last summer and found (unfortunately AFTER I was on my trip) that it was a nice way to house 6 people in the same place but you DID need to have the app ready to use on your phone. Uber I had not used before and I must say that I found it very convenient. My cousins use it all the time in the city. I know there is a lot of controversy around it, but here's what I liked about it: (1) the cars are fairly new and clean (some taxis I have taken in Mexico City... well, let's just say they've seen better days), (2) there is no money that exchanges hands since everything, even a tip, is put on the app, and, for security, (3) you have the name of the driver, a picture of him or her, and the license plate, make and model of the car, so you can make sure you have the right ride. I thought it was tremendously convenient and safe, although we were never out very late at night. It gave me the opportunity to go places quickly and easily. I have taken he subway and we did so again, but this was in some ways much simpler. I also found that the rates were a little better than regular taxis.

So, used Uber to go to the Market of Arts and Crafts (Mercado de Artesanias) where I found some really interesting and wonderful crafts. These also are always changing and evolving, so it's never dull to go back to the same vendors. We took the subway to see Chapultepec Castle which was built in 1785 on a hill in the middle of Chapultepec forest (now a park) and was the home of Emperor Maximilian of France and his wife Carlota from 1864 to 1867 when he was deposed. It still has much of the furnishings from when they lived there. It also offers wonderful views of Reforma Avenue (which Maximilian had built) which goes into the center of the city.

So, my recommendations for you should you venture to the lovely and historic Mexico City: Well, that's all I have for now. If you have questions you can email them to us about Mexico Trip cancellation insurance or US travel insurance to Mexico and we would be happy to try and answer them for you.

Photos Copyright by A Christina Longbrake

As ever, we wish you safe and happy travels,
Hasta luego,
Christina Longbrake 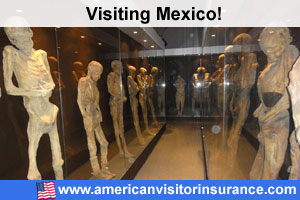 It has proven to be one of the city's most popular attractions and remain an important cultural phenomena relating to local customs and traditions. 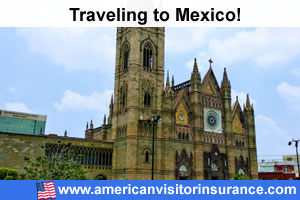 Built in neo-Gothic style, the church is famous for its richly embellished exterior and many European-made components.

It consists of many rare species such as white lions, Bengal tigers, and black panthers, plus a large primate contingent featuring gorillas and orangutans. 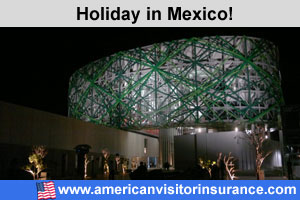 It include ancient engravings and sculptures, historic documents, and textiles dating from pre-Spanish period, as well as fascinating displays covering colonial period.

Important factors while deciding on the best travel insurance to Mexico.

Mexico travel insurance online claims process for getting medical care in a hospital.

More international travel insurance categories...
Welcome to American Visitor Insurance  - Online Chat
We are sorry, but all our agents are currently offline. Please leave a message and we will get back to you promptly.